Campbell Sworn In as Fauquier County School Board Member 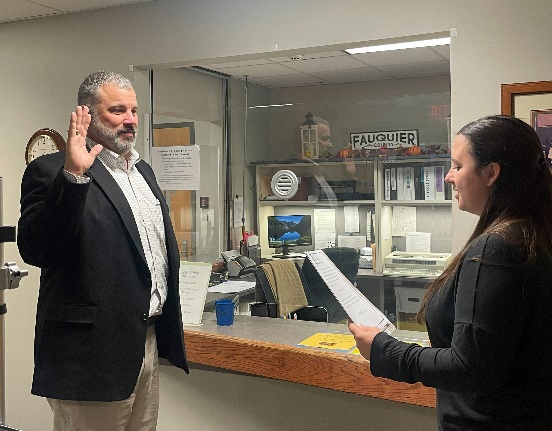 Marshall C. “Clay” Campbell took an oath on November 16, 2022, to serve as the Scott District representative on the Fauquier County School Board. Campbell won the special election held on November 8, 2022, and assumed the seat previously held by Vincent Gallo. Gallo served as interim Scott District representative after being appointed by the Fauquier County School Board to fill the seat vacated on December 15, 2021, by Suzanne Sloane.

“Now that the election process is behind us, at least for a few months, I look forward to rolling up my sleeves and getting into the schools so that I can meet and interact with the parents, teachers, students and administrators,” Campbell said.

Campbell serves as a territory manager for James River Equipment, a role he has held since 2001. He earned his Bachelor of Arts degree from the Virginia Military Institute (VMI) in 1994. In 2017, Campbell began serving as a board member for the Boys and Girls Clubs of Fauquier and currently serves as board chairman.

Along with board service, Campbell holds the position of class agent for the VMI class of 1994. He has earned the distinction of Master Mason for Fredericksburg Lodge No. 4 and is a member of the Bridge Community Church.

Campbell is the father of five children, two of whom currently attend Fauquier County Public Schools. He, his wife Christine, and their children have resided in the Scott District since 2013.